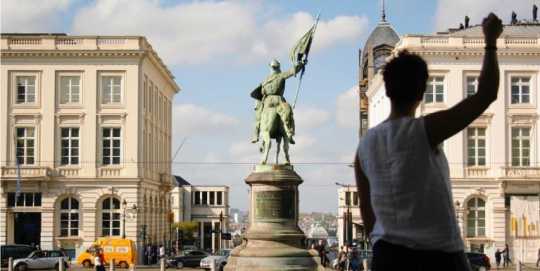 A story that jumps through time and across geographies brings the artist and her grandmother in Palestine, together with two well-known European personalities; Godefroid de Bouillon, known as the first king of Jerusalem and the illegitimate son of the famous Arabian poet Antar Bin-Shaddad, and the 16th-century Flemish painter Pieter Bruegel. Time collapses as we travel back and forth across millennia—from Jerusalem, to Brussels, to London, and back to Jerusalem. Following the non-linear hakawati structure of epic story-telling, personalities and images are playfully displaced and re-contextualised in a colonialist history. Using different forms of collage in both the narrative and the images, Hijawi tactfully invites us to look with her at how colonialism is deeply embedded in canonised European artworks.

This performance is part of a larger body of work entitled 'Chicken Scribbles and the Dove that Looks like a Frog' which explores the aesthetics of representation in artworks that allude to the political histories of Palestine through various media.

Earlier versions of this piece, were presented in 2018 as a work in progress under the title 'Reflections on the Failures of the Letter H(eitch)' at BOZAR, KASK, Chambres d'O festival in Belgium.

free (1st Wednesday of the month)