The Old Masters Museum and the Magritte Museum are open! Find all prevention measures and practical information here. The other collections of the RMFAB will reopen at a later stage. The library and archives are accessible by appointment with a limited service. In the meantime, keep following us @FineArtsBelgium #FineArtsAtHome and discover our latest videos, creative workshops, virtual exhibitions and other exclusive contents here! 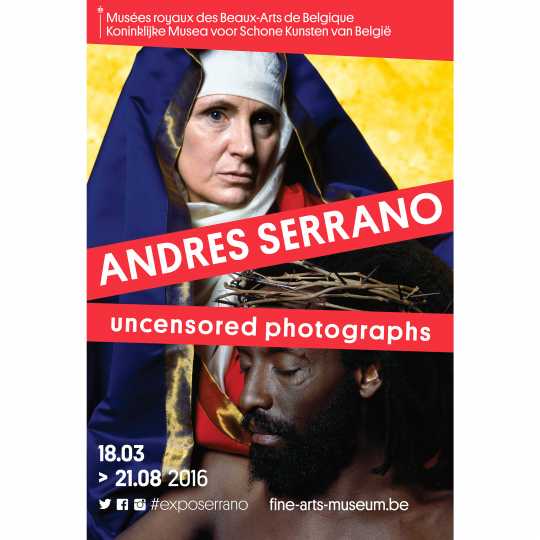 As a major figure in the contemporary art scene, Andres Serrano unveils an often disturbing reality through the lens of his camera. Religion, death, sex and violence perfuse the American artist’s work and all figure in the retrospective exhibition dedicated to him by the Royal Museums of Fine Arts of Belgium*.

Yet beyond these powerful themes, the exhibition reveals Serrano as an attentive witness to the world and mankind. His artistic career is shown by selecting the most symbolic images from all the series he has created. From fascination to provocation: four  works that were considered scandalous and were vandalized during past events will also be on display to question the limits of censorship. To show Serrano means to assert our basic values. Against barbarism and intolerance. Against obscurantism and inhumanity.

* Some images may be disturbing . They are exhibited in a separate room.

Simultaneously, the Museums will – in the streets of Brussels – present Serrano’s brand new series “Denizens of Brussels”, striking portraits of Brussels’ homeless. The photos were also visible in Recyclart (18.03 > 01.04).