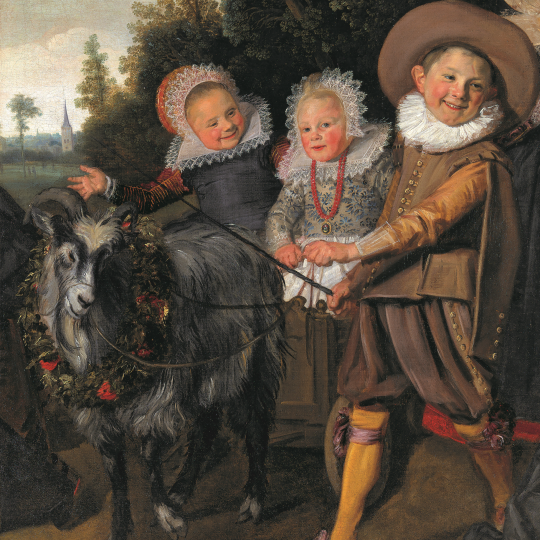 The exhibition reunites three fragments of the Portrait of the Van Campen family by master-painter Frans Hals (1582– 1666) for the first time in over 200 years, after the painting was separated at the beginning of the 19th century.

During the restauration of the work Three Children with a Goat Cart by Frans Hals from the collection of the RMFAB, a remarkable theory was confirmed: the work was originally part of a bigger family portrait that Hals painted for the cloth merchant Gijsbert Van Campen. Two other parts of the canvas are found in the collection of the Toledo Museum of Art (Ohio, USA) and a European private collection.

The reunited masterpiece is joined by the other three family portraits that Frans Hals painted during his lifetime. This second unique reunion show the brilliancy with which the artist broke away from traditional conventions of the genre, setting new standards for Western art.

Simultaniously with the opening of the permanent “Dutch School” collection, and on the occasion of the Rembrandt year, the Royal Museums of Fine Arts of Belgium present two temporary exhibitions to further highlight the Dutch artistic talent. (Re)discover the master-painters of the Golden Age, the family portraits painted by Frans Hals, and a cabinet with delightful 18th-century drawings!
[more info]

The ticket offices close half an hour before closing time.
The museums are closed on Mondays and 1/05
Any person entitled to a free ticket (e.g. ICOM/journalist), is to go directly to our ticketing desk.

Free admission with a ticket for the permanent collection