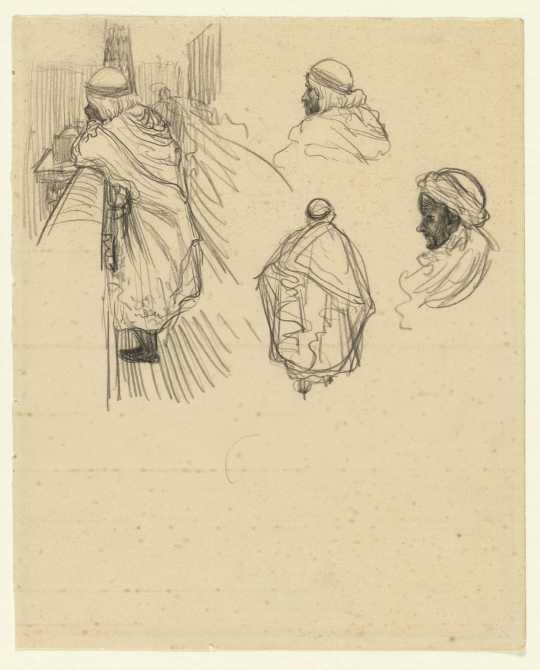 The dynamic collection of the Fin-de-Siècle Museum offers a rotation of artworks on a regular basis. For curatorial reasons around a hundred works on paper, photographs, objects and documents are rotated every six months, thanks to the help of partners.

This temporary exhibition, accessible with a ticket to the Fin-de-Siècle Museum, presents the drawings, photographs and certain paintings that the Belgian artist Henri Evenepoel (Nice, 1872- Paris, 1899) produced during his Algerian period. Despite it being a difficult time in his life, the drawings and paintings made during this period are considered to be among the best of his work. Some fifty known sketches and watercolours show that here, too, it is mainly the human figure that fascinates him. This relatively small number can be explained on the one hand by the fact that Algerians did not want to be portrayed, and on the other by the frequent use of his photo camera, with which he took more than 400 pictures in the four months he spent on the African continent.

The Royal Museums of Fine Arts of Belgium hold sixteen paintings, over thirty drawings, a sketchbook and some prints, the collection was also completed in 1970 by hundreds of letters from the artist to his father, as well as 877 negatives of his photographs. On the occasion of this temporary exhibition, a selection of these photographs is now printed in its original state. This has been made possible thanks to the digitisation of the negatives which was carried out by the Royal Institute for Cultural Heritage, within the framework of the DIGIT PROGRAMME for the digitisation of the scientific and cultural heritage of the FSI and the Royal Belgian Film Archive (Cinematek), financed by the Federal Belgian Science Policy Office (BELSPO).

Any person entitled to a free ticket (e.g. ICOM/journalist), is to go directly to our ticketing desk.