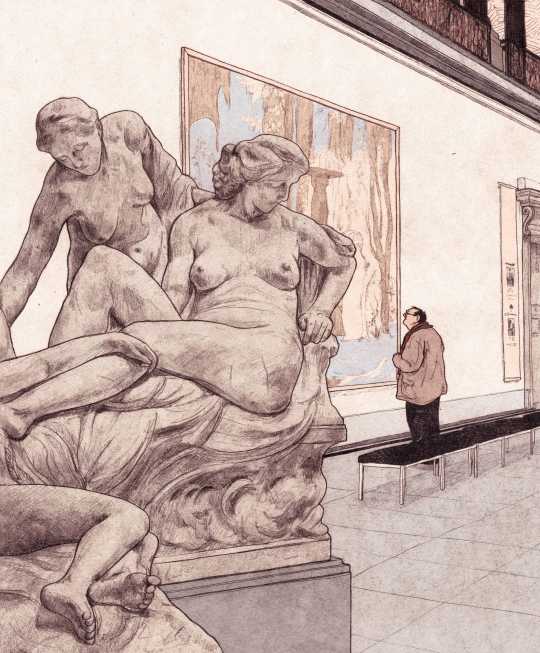 Publishing house Dargaud and the Royal Museums of Fine Arts of Belgium organize an exhibition of original drawings by the artist Ben Gijsemans, a Belgian comics author who chose the splendid setting of the museums as the background of his latest work.

A word from the author

In my first drafts of this book, there was no mention at all of the Royal Museums of Fine Arts ... or any museum for that matter. On the contrary, none of the interests of my protagonist then, nor his entourage, could have led him to a museum. The only thing he was interested in after work, was going to the pub. I found a rhythm: always the same coffee, always the same zinc bar, always the same pillars. The plot was clear, and it was the subject of my project.

When I started this book, I had just moved to Brussels. Although this great city was unknown territory for me, a place where everything was still to be discovered, I found myself often returning to the Royal Museums of Fine Arts. With my profound admiration for the Old Masters, this was hardly a surprise. Several times a week, I settled on one of the benches in the museum, and slowly, by grinding my brain, I began to write. It always resulted in short texts, in which I was trying to identify my protagonist and sometimes impose a story on him. At first, I remained faithful to my initial project frame until I realized that I had lost sight of it. The coffee had long since turned into a museum. This transformation must have taken place somewhere between the cracks of unconnected texts. From that moment on, the protagonist's character took shape as well as his story. A story in which the Royal Museums of Fine Arts were playing an increasing role. I called him Hubert and I continued writing assiduously, perched on a museum bench.