Find all prevention measures and practical information here. The library and archives are accessible by appointment. Keep following us @FineArtsBelgium #FineArtsAtHome and discover our latest digital contents here! Home is where the Art is. 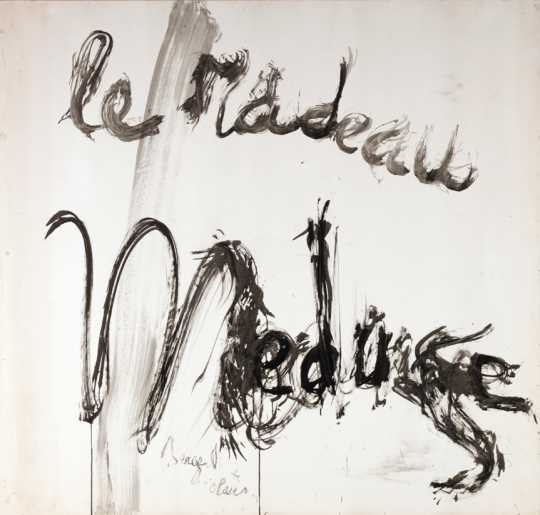 Vandercam, who then lives in Albisola in Italy, creates a multitude of works with writers in the pure CoBRa tradition. During a trip to Denmark in 1961, he discovers Tollund Man, which brings him back to a brutal and libertarian figuration. Hugo Claus follows the work of the painter and writes a poem that is published in 1963 on the occasion of an exhibition of Vandercam in Rotterdam. The following year, the collaboration continues with a theme that can be regarded as the synthesis of the conducted research. The comrades switch roles: Claus paints, Vandercam writes.

The Raft of the Medusa refers to a news fact that Géricault transcended in his large painting of 1818-1819: shipwreck, reckonings, and cannibalism make the raft a concentrate of inhumanity which refers directly to the cruelty of the original sacrifice embodied by Tollund Man. Through the series of five paintings realised in a form of lyrical high, Claus and Vandercam bear witness to the permanence of both an insurrectional and libertarian CoBRa spirit.

Exhibition accessible with a ticket for the collections