The Museum & Magritte Shops will be closed for inventary on 18 and 19 January 2022 - PLEASE NOTE: the Covid Safe Ticket is required to access the museum's exhibitions and activities. 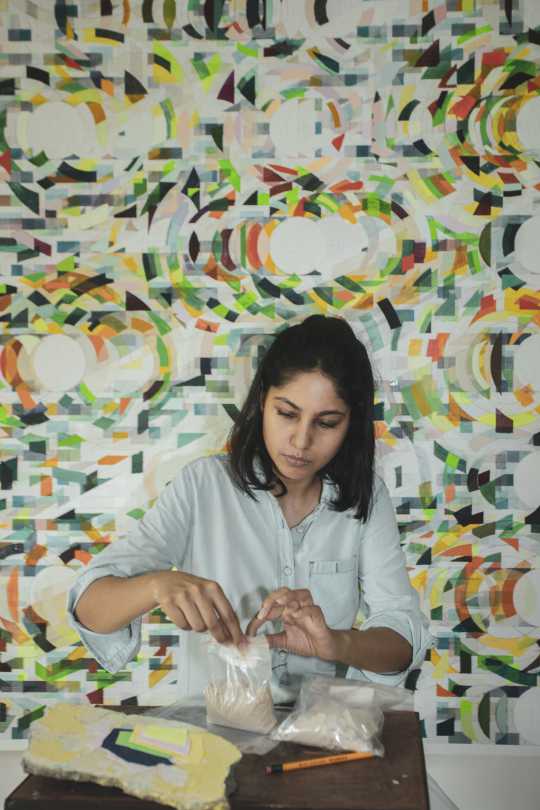 Tanya Goel's (1985, New Delhi, India) work is characterised by a methodical approach in which spontaneity and methodically calculated order are simultaneously present. Her dense, complex and ambitiously scaled works evoke the rigorous exploration of abstraction and the implementation of a mathematical creative process; playing with the ambiguity created by the delicate balance between structure and chaos.

Colour is a central theme in Goel's work, who refers to it as 'light, material and surface'.  The artist makes her own pigments from various materials (glass, concrete, mica, graphite, leaves, etc.), most of which are taken from demolition sites in New Delhi. She thus inscribes her approach in a reflection on urban mutations, through an aesthetic that is reminiscent of the modernist experiments with which the Belgian art scene is closely associated, whether it be Joseph Albers for colour, or Agnès Martin for serialism.

Control and intuition, rigour and freedom, structure and chaos meet in a creative universe that is entirely her own, and which is closely linked to the antagonisms between body and mind, science and spirituality. The selection exhibited this spring at the Royal Museums of Fine Arts of Belgium bears witness to the artist's interest in colour and materiality, without forgetting the urban landscape, and includes large-scale canvases dating from 2014 to the present day, as well as a series of some twenty watercolours from the 'Botanical studies' series, which were born during the period of confinement.

Any person entitled to a free ticket (e.g. ICOM/journalist), is to go directly to our ticketing desk.